PLAZMA APACDigital Transformation during the Pandemic with DATA

PLAZMA is a Digital Transformation Community. This marks the 13th PLAZMA event, and with the current global Pandemic PLAZMA has transformed into a virtual event where participants from across the Asia Pacific region can share their knowledge and experience in pioneering digital transformation across all our organizations.

The theme of PLAZMA13 is “Digital Transformation During Pandemic with Data”. With the disruption brought on this year due to COVID-19, Data and Technology has been brought to the forefront, and is driving new business innovation. Digital technology is keeping us connected even when we cannot physically meet. Amid the challenges, companies and organizations are using this as an opportunity to reinvent themselves. Policies are becoming more flexible, and Digital is being integrated into more aspects of business. How can we accelerate the Digital Transformation of business, society, and ourselves? This is the question PLAZMA seeks to explore.

We will open with a discussion with Yoshiaki Ito, CEO of X-TANK Consulting who has been a popular PLAZMA speaker since 2018 where he will discuss how Business Leaders can adopt a VUCA mindset and drive innovation during the Pandemic. We also have an insightful lineup of real world Digital Transformation case studies from Yamaha Motors APAC, GetPlus Indonesia, and Tri Petch Isuzu Sales Thailand.

For the first time PLAZMA13 will be held in three languages, Japanese, English and Korean. While the EXISTING models are transitioning to the "New Normal", we at PLAZMA are transforming into a new community. Please join us.

We will show a number of DX case studies in Japan and Korea. 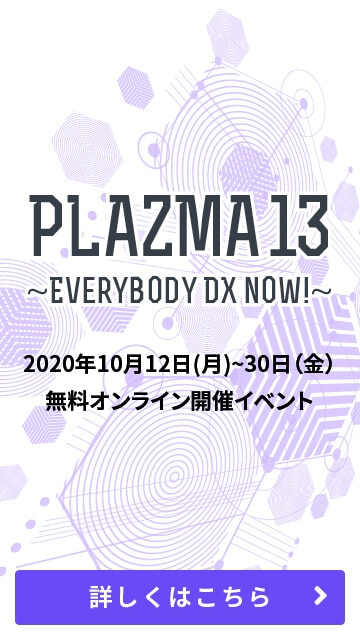